Advancing the Road to Peace: Lessons from Afghanistan at PeaceCon@10

By
Tanya Henderson
Published on
February 10, 2022
Filed under
Women's Rights 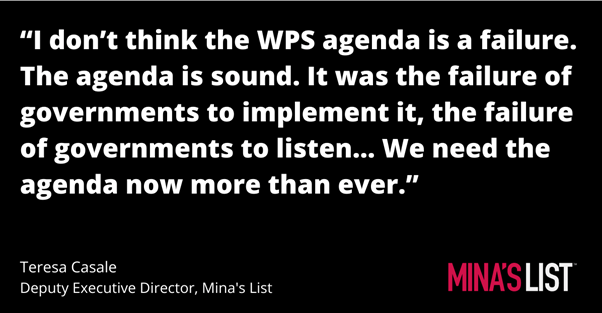 The women, peace, and security (WPS) agenda is now “more needed than ever,” Deputy Executive Director for Mina’s List Teresa Casale said at a recent panel event for Alliance for Peacebuilding’s 10th annual PeaceCon. Her comments came following the recent failure of the international community to implement the WPS agenda in Afghanistan, echoing broader concerns among WPS practitioners and advocates about the sidelining of women in global peacebuilding processes.

The panel session, titled Advancing Policy to Practice: Supporting Women Peacebuilders in Afghanistan, the Sahel, and Beyond, featured experts and practitioners of WPS from around the world, including Afghan women’s rights activist and Mina’s List board member Palwasha Hassan, Gender Specialist at DAI Global Zohra Sohail, and Director of Counterpart International Mehreen Farooq. During the session, the panelists discussed the vital role of women in peacebuilding processes, the lessons learned from Afghanistan, and the roadmap for the WPS agenda moving forwards.

The current crisis in Afghanistan demonstrates clearly the disastrous consequences of marginalizing women from peace talks and high-level negotiations, the panelists agreed. Sharing their experiences of the various rounds of peace talks held between the United States, the Taliban, and the former Afghan government before the Taliban swept to power last August, Ms. Hassan and Ms. Casale said that women were “systematically” sidelined despite their extensive and historic efforts to push for an inclusive peace agreement.

Referencing the vital work of the Afghan Women’s Network (AWN), which she co-founded in 1996 to push for women’s equal participation in Afghan politics and society, Ms. Hassan told the audience:

“It has been 26 years since I and a group of women co-founded the Afghan Women’s Network after the Beijing conference. [The network] created an agenda for peace in Afghanistan, tried to break the silos of small-service delivery at the community level, and tried to mobilize women around a bigger agenda of fighting for freedom.”

She also noted that:

“[Afghan] women have been sowing the seeds of peace for years, through small, community-level work, in refugee communities, and in civil society organizations. So, despite very difficult and tough circumstances, women set up their own organizations long before the international community [arrived].”

Afghan women continued to mobilize domestically throughout the multiple rounds of peace talks, with support and solidarity from a global consortium of women’s groups in the U.S., Europe, and around the world.

In official processes, however, women were consistently sidelined, with no formal mechanism for ensuring their voices were heard. Various rounds of peace talks were conducted with few or no women present – such as the 2019 Intra-Afghan Dialogue talks in Doha, which included only four women negotiators on the Afghan team. As Ms. Casale remarked, “four out of 21 is hardly parity, especially when trying to resolve one of the most gendered conflicts in the world.”

Despite their exclusion from high-level peace talks, Afghan women continued their advocacy throughout 2020 and 2021 and warned the international community that a rushed withdrawal would help the Taliban gain ground. Yet, in April 2021, U.S. President Joe Biden announced the unconditional withdrawal of American troops by September 11 2021, decimating years of women’s advocacy efforts in a single stroke.

Afghan women still did not give up. That April, 100 Afghan women delegates from around the country gathered for parallel peace talks organized by Mina’s List and other civil society organizations. Together, the women developed 60 recommendations for a just and lasting peace in Afghanistan, which Mina’s List “sent to every contact we could think of and every government who would listen,” Ms. Casale said.

However, the U.S.’s unconditional withdrawal of its troops in August left an “imbalance of symmetry” between the Afghan government and Taliban forces, and removed any leverage Afghan women had over the Taliban, Ms. Hassan explained. The resurgent Taliban quickly took over the country. Under its rule, Afghan women and girls have been excluded from almost all forms of public life, banned from working, attending secondary school, or using communal facilities, while new reports emerge almost daily of women facing abductions, detentions, and extrajudicial killings for daring to protest these stringent restrictions. In essence, it is gender apartheid.

However, as Ms. Casale pointed out, this outcome was not a failure of the WPS agenda:

The sheer magnitude of Afghanistan’s current humanitarian crisis raises important questions about how the international community can reduce human suffering in the country without empowering the Taliban. Ms. Hassan and Ms. Casale emphasized that, regardless of how international actors choose to engage, they must give women a central role in humanitarian assistance programs and aid delivery. Women understand best what other women and families in their communities need and, as Ms. Hassan observed, are often the only financial support for their family:

“In 2001, we had statistics of 2 million widows of heads of households who were women alone, and since then war has never stopped. We have a lot of women [who are the only support for their family]. If they don’t have work, where do they go?... We have to find ways where women in particular are involved in the delivery of aid.”

One positive development for the implementation of the WPS agenda in Afghanistan has been the recent appointment of Rina Amiri as U.S. Special Envoy for Afghan Women, Girls, and Human Rights. But, as Ms. Casale noted, for Amiri to be effective in her role the U.S. government must lend her its full support – ensuring a whole-government approach that does not leave women’s issues “siloed.”

Moving forward, the U.S. and the international community must “stay in compliance with their own [WPS] agendas,” Ms. Hassan concluded. Ms. Casale agreed, adding that the U.S. government should “let women lead.” She continued:

“Listen to us, believe us… Let’s stop questioning the agenda and just move forward with it.”