By
Teresa Casale
Published on
September 1, 2021
Filed under
Women's Rights 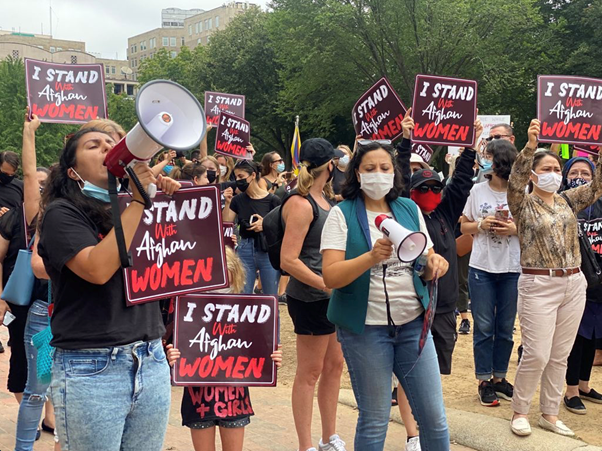 In a recent interview with USA Today, Mina’s List founder and executive director Tanya Henderson highlighted the challenges that at-risk Afghans will face as they try to leave the country now that the US has finished its evacuation operation.

While the US was able to evacuate 123,000 people out of Kabul—and international governments have evacuated tens of thousands as well—refugee experts estimate that as many as 300,000 at-risk Afghans remain behind. This includes high-risk women who have been at the forefront of efforts to secure peace and stability in the country over the past 20 years.

Now that all foreign forces have withdrawn from Afghanistan, many of those left behind have been “exploring land routes and other options, which are often dangerous and uncertain,” Ms. Henderson told the newspaper.

The article outlines the reasons why many women and girls are still trying to flee the country. Many fear a return to the Taliban’s harsh rule during the 1990s, when women were not allowed to appear in public without a male relative, or mahram, and girls were kept from going to school.

With a significantly reduced international media presence and a more challenging environment for local media, it will be even more important for the US and the international community to push for the rights of women and marginalized communities to be respected, and ensure that the voices of those who remain in Afghanistan continue to be heard internationally.

Mina’s List will continue to mobilize international support to evacuate at-risk Afghan women and advocate for the rights of all women and girls who remain in Afghanistan. We are also committed to working closely with those who have been evacuated and now face the challenges of resettling in a new country, often while dealing with trauma and grief.