By
Teresa Casale
Published on
November 16, 2021
Filed under
Women's Rights 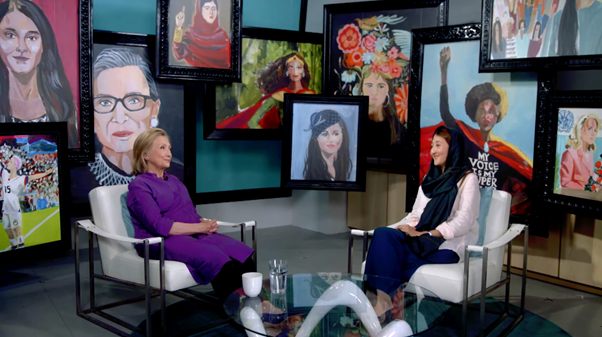 Former US Secretary of State Hillary Rodham Clinton noted Mina’s List’s ongoing work to evacuate and support at-risk Afghan women during the “Yes We Did! The Vital Voices of 2021” event hosted by Vital Voices, NowThis, and OWN: Oprah Winfrey Network.

“As we are watching the consequences of the US withdrawal from Afghanistan, Vital Voices, Georgetown Institute for Women, Peace and Security, Mina’s List, and a coalition of women leaders, both Afghan and American, are working together to help the most at-risk women and their families.”

During the chaotic US withdrawal from Afghanistan in August 2021, Mina’s List collaborated with Vital Voices, GIWPS, and other organizations to evacuate Afghan women leaders who are at the top of the Taliban’s kill lists when they took over the country.

Since the official end of the withdrawal, Mina’s List and our partners have continued to advocate for continued efforts to evacuate high-risk women who were left behind during Operation Allies Welcome. We are also supporting Afghan women and their families who have managed to leave Afghanistan, ensuring that they have access to the resources they need for their resettlement.

Secretary Clinton’s comments came during the second annual NowThis NEXT event celebrating changemakers and the next generation of inspiring women leaders, during which she interviewed Muqadessa Yourish, a former Deputy Minister for Commerce and Industry of Afghanistan who was evacuated from Afghanistan in August 2021. Ms. Yourish was named as a NowThis NEXT honoree for her bravery and resilience.

Ms. Yourish has also worked with Mina’s List as part of a delegation that presented policy recommendations for a just and lasting peace to the White House Gender Policy Council and the United States National Security Council ahead of the US withdrawal from Afghanistan. The recommendations came from the Kabul Peace Workshops held in April 2021, attended by over 90 Afghan women delegates from across Afghanistan.

In what she called “the hardest decision of my life,” Ms. Yourish chose to leave Afghanistan once the Taliban took over Kabul:

“I could stay and die, if not right away, a gradual death, and be a silent observer and watch a massive rollback of my rights… Or flee and keep my voice. I’m trying to work for the Afghanistan that I desire to live in.”

Ms. Yourish is now the third generation of women in her family to become a refugee. During her conversation with Secretary Clinton, Ms. Yourish said:

“It pains me that the world is silently observing the atrocities. It even makes me feel that probably the world thinks that the people of Afghanistan deserve their misery.”

However, Ms. Yourish said she believes that “this is not the end of Afghanistan,” and still holds hope for the future. Mina’s List will continue to support Ms. Yourish - and the many other brave Afghan women both inside and outside Afghanistan - as they fight to have their voices heard.