Writing in The Hill, Teresa Casale calls on the U.S. to support the Afghan Women’s Parliament in Exile

By
Tanya Henderson
Published on
December 2, 2021
Filed under
Announcements 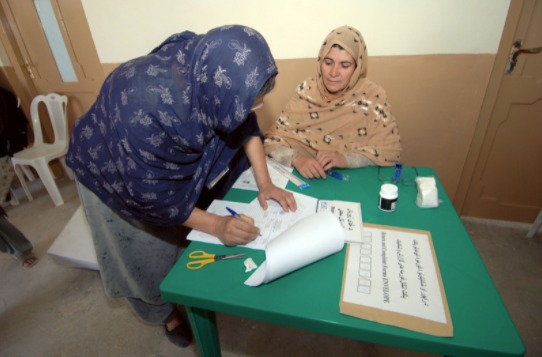 The international community — led by the U.S. — must remember its commitments under the Women, Peace, and Security agenda and listen to the recommendations from the recently launched Afghan Women’s Parliament in Exile, Mina’s List Policy and Advocacy Director Teresa Casale wrote in an op-ed published by The Hill.

More needs to be done to apply “maximum diplomatic pressure on the Taliban to allow for full human rights for women and girls,” Ms. Casale wrote. Women must be brought to the table to speak directly with the Taliban and help to rebuild a more equal and stable Afghanistan. In addition, the international community “should ensure women’s groups in Afghanistan are funded and supported to address the growing humanitarian needs of the Afghan people.”

Ms. Casale noted the welcome example of women’s substantive leadership that came in the form of a recent open letter from all 24 women U.S. senators. This bipartisan letter called on President Joe Biden and his administration to protect the rights of women and girls and urged the development of an interagency plan to preserve the political, economic, social, and basic human rights of Afghan women and girls.

Despite these positive developments, “much more needs to be done.” One additional, positive step would be explicit support for the Afghan Women’s Parliament in Exile, which formally launched in Athens, Greece, on November 27.

These Afghan women members of Parliament who were evacuated to Greece “still wear the mantle of leadership… They have set an ambitious agenda for themselves — they will advocate for the human rights of women and girls still in Afghanistan as well as for humanitarian aid to reach those who need it most during this time of acute crisis. They will also seek to work in coordination with Afghan women leaders still in the country.”

Reflecting on the Afghan peace talks in the first half of 2021 — which were effectively cancelled after the Taliban boycotted official talks and President Biden announced the unconditional withdrawal of troops from Afghanistan — and the chaotic withdrawal period, Ms. Casale wrote:

“We failed the women of Afghanistan in August. Today, they are under attack as their rights are being rolled back and the progress of the past 20 years is erased. They are facing increasing violence while experiencing the humanitarian catastrophe caused by the political and economic collapse of the country. And yet, despite losing everything, Afghan women are still leading, both inside Afghanistan and in exile.”

The U.S. and the international community must not miss yet another opportunity to listen to Afghan women.

Read the full op-ed in The Hill here.