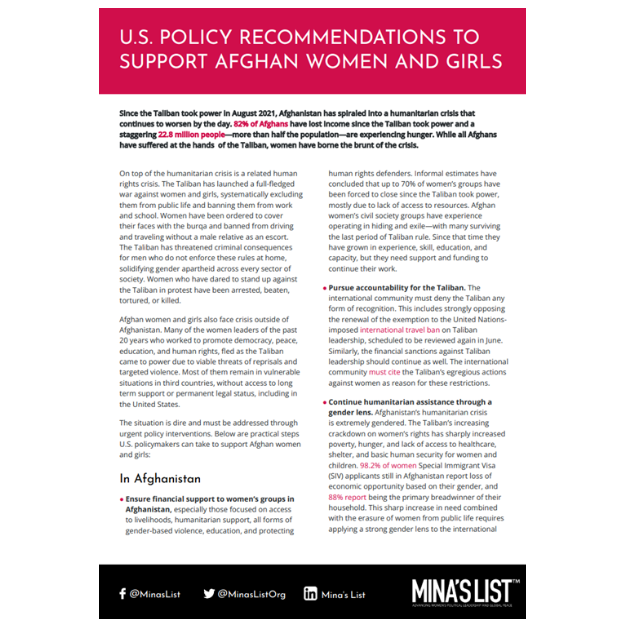 Since the Taliban took power in August 2021, Afghanistan has spiraled into a humanitarian crisis that continues to worsen by the day. 82% of Afghans have lost income since the Taliban took power and a staggering 22.8 million people—more than half the population—are experiencing hunger. While all Afghans have suffered at the hands of the Taliban, women have borne the brunt of the crisis. On top of the humanitarian crisis is a related human rights crisis. The Taliban has launched a full-fledged war against women and girls, systematically excluding them from public life and banning them from work and school. Women have been ordered to cover their faces with the burqa and banned from driving and traveling without a male relative as an escort. The Taliban has threatened criminal consequences for men who do not enforce these rules at home, solidifying gender apartheid across every sector of society. Women who have dared to stand up against the Taliban in protest have been arrested, beaten, tortured, or killed. Afghan women and girls also face crisis outside of Afghanistan. Many of the women leaders of the past 20 years who worked to promote democracy, peace, education, and human rights, fled as the Taliban came to power due to viable threats of reprisals and targeted violence. Most of them remain in vulnerable situations in third countries, without access to long term support or permanent legal status, including in the United States. The situation is dire and must be addressed through urgent policy interventions. The document contains actionable recommendations for U.S. based policymakers.