The U.S. failed to deliver on its women, peace, and security commitments in Afghanistan, writes Mina’s List Deputy Executive Director Teresa Casale in The Hill

By
Tanya Henderson
Published on
March 23, 2022
Filed under 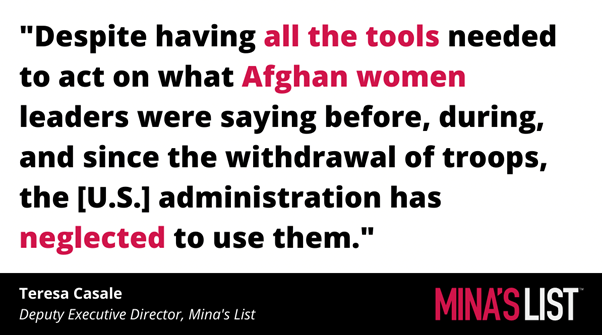 After the betrayal of Afghan women, the U.S. can no longer claim to be the world’s leading champion of women’s rights, Mina’s List Deputy Executive Director Teresa Casale wrote for an op-ed in The Hill marking International Women’s Day 2022.

Since taking control of Afghanistan, the Taliban has severely restricted the rights of women and girls and clamped down brutally on those who have dared to protest.

Despite this, Afghan women continue to demand the return of their rights and serve as powerful agents for change in their communities, highlighting what women, peace, and security (WPS) practitioners have known for years: that women are uniquely impacted by war and uniquely positioned to end it. As Ms. Casale wrote:

“[Women] are central players in protecting, defending, and rebuilding peace. They see firsthand what armed conflict does to their communities and research shows they have the solutions. However, all too often, they are sidelined, and their views and voices ignored.”

Central to the WPS agenda is the application of a gender lens to conflict operations, which the U.S. government pledged to implement in its 2019 Strategy on Women, Peace, and Security. Yet, as Ms. Casale pointed out, at every stage of its withdrawal from Afghanistan, and in the peace talks it convened before the Taliban took over, the U.S. administration failed to listen to Afghan women or to act on what they were saying.

Afghan women continue to be sidelined by U.S. immigration policy and the strict criteria it has placed on those seeking refugee assistance. As Ms. Casale noted, Operation Allies Welcome, the U.S. administration’s operation to evacuate Afghan citizens who supported its mission in Afghanistan, prioritized “primarily Afghans who were employed by the U.S. military, a population that is overwhelmingly male.” By doing so, she added, “the U.S. unwittingly deprioritized partners and allies who are female,” despite the fact that many of these women had worked with the U.S. and the wider international community for decades to advance democracy in Afghanistan and build plans for a lasting peace.

Failing to help these women has opened the door to their persecution under a resurgent Taliban regime. With the Taliban back in power, Afghan women have been stripped of their rights to work, attend school, and travel independently, while Afghan women’s rights activists have faced threats, assaults, and forced disappearances for demanding the return of their fundamental rights and freedoms.

Such brutal treatment makes the lack of legal pathways for Afghan women seeking refuge in the U.S. even more shocking, and highlights the need for a specific refugee category for women and girls.

Despite having “all the tools” it needed to act on the WPS agenda in Afghanistan, the U.S. did not uphold its commitments. As Ms. Casale concluded:

“If we can tolerate a situation where Afghan women are deleted from public life and refuse to acknowledge that women leaders need special protection from the Taliban, the U.S.’ credibility as champions of women’s rights is found wanting. No more does this sting than on International Women’s Day.”

Read the full op-ed in The Hill here.